What being at #Junket was like from someone who didn’t at all fit in. 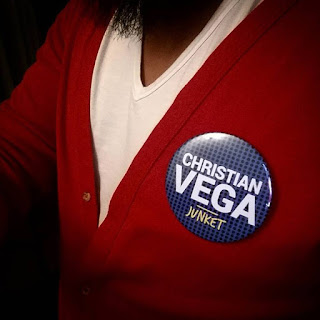 It was weird being invited to #Junket.  I don’t know how they got my contact details but an invitation turned up in my inbox one day

“Junket is an un-conferencehosted by the folks behind Australian pop-culture and opinion site Junkee.com.Junkee are inviting 200 of Australia’s best and brightest young minds to gatherat the QT Canberra from November 1 to 3, to share ideas, get advice, beinspired, innovate, teach, learn, network and have fun -- all with the(suitably ambitious) aim of helping set the agenda for Australia’s future.”

WTF?!  Hm. OK. Someone’s obviously been punk’d… or they’re about to be.  When one has experienced the lifetime of stigma and prejudice that I had, an intense apprehension accompanies any social situation that does not explicitly state that your community or allies will be present.

My thought process eventually concluded with, “y’know just go, it’s not like I’ve got much in your diary these days*?” and this would be the thought I would keep coming back to in order to convince myself to go.  (* I’ll eventually get to this)

So in the lead up to the (un)conference, delegates were invited to sign up to the event’s app, allowing one to check out who else was going.  This didn’t make it any easier- there was CEO of this and founder of that; the twitter elite and the tumbler famous; next-level hipsters and celebrated youf leaders - everyone was intimidatingly impressive- and though I had worked hard to make achievements in my own little corner- I felt this wasn’t comparable to what others had done with their careers.  Also, at this moment, I am unemployed, technically homeless, completely robbed of my professional confidence* and I’m not really one who naturally enjoys mingling and meeting new people- what could I possibly contribute to this self-declared “junket”?

After driving down from Sydney, I checked in to the ridiculously lush QT Canberra.  There was lots of fanfare out to welcome delegates who had gathered around the hotel lounge. I made a bee-line for reception so I could quickly get to my room and hide in my self-doubt and anxiety until just before the welcome session.

5:30pm finally rolls around and after a quick shower and shoving the hotel “welcome donuts” into my face to settle my nerves, I made my way to the hotel’s conference space and found no one I knew (or maybe just one person I hardly knew) and sat down.

“This is a safe space for optimism; this is a safe space for altruism,” Jess Scully, the “curator” (ie: the person who headed up the delegate selection process) announces. OK. Keep an open mind, you cynical arsehole. “Go to this fun thing and that- there’ll be free drinks!” Hm. Not that effective for someone who doesn’t drink and with already massive reservations. What am I doing here?!

“Now all of you who are hosting a session get up and you have 60 seconds to pitch your idea to the audience.” My heart rate shoots through the roof.  You see, in the week before the conference Jess had encouraged (pressured maybe?) me to identify some a topic I might want to discuss.  Again, being so full of self-doubt and super time poor* I kind of ummed and ahhed and bashed out a rough idea on my keyboard and emailed it through.  I didn’t think I had refined it enough to actually lead a discussion with a bunch of young go-getters who I didn’t know let alone throw it into a pitching session, a competitive corporate process that isn’t really part of the way I work.

A line for the microphone had formed.  I deliberately placed myself behind about 60 other delegates- giving myself about an hour to observe others pitch and start to put together something I could present.  Again, this didn’t make it easier; everyone was super articulate, racing against a 60 second countdown, the professional development and training that formed the public speaking skills being exercised was obvious. But then some of the ideas people were pitching were ones that embodied a politic I could identify with- encouraging more young people to vote, dismantling white supremacy, preserving indigenous culture in a digital age, challenging sexism in video games, normalising differently abled people, making representations of sex in the media less weird. Every pitch was met with applause and encouragement. Hm, while I’m out of my comfort zone, at least there’s stuff I can talk about. Then came a pitch that surprisingly that was surprisingly reassuring.

“… how do we value introverted leadership as much as extroverted leadership?” Again, massive applause.  Encouragement. This was a moment that I thought, alright, so you’re a bit different, that’s fine. These peeps seem cool, it’ll be ok… oh wait… Argh, What the hell was I going to say?!

With about 5 delegates in front of me my mind retreated to its zen-like survival state.  “Just do what you always do,” I told myself.  So I did…

“Hi. My name is Christian and while I don’t have a lot of time to introduce myself I’ll say 2 things: I’m someone with a history of being an actual junkie and a whore and while those words may be slurs to you- ones that you probz shouldn’t use- to me they, are my job, my life, and my community.”

Everyone became silent. Just keep going and no one’ll hear the crickets…

“So people like me spend a lot of time fighting for acceptance, to be recognised as a legitimate part of the broader community. But the prejudice, stigma and discrimination we are tired of dealing with is not experienced by us alone. Laws are a way of saying who is in and who is out in this country. So rather than constantly arguing for recognition- because I think we actually shouldn’t have to- I want to turn this conversation around and ask instead, in Australia, what is a crime?”

Following the pitching session was dinner and as I made my way to the eating space out of nowhere some random walks up to me, shakes my hand and says, “hey I really respected what you did up there and I’d like to talk to you more.” When acceptance so earnestly expressed one takes a moment to scan for insincerity… nope… whoa!

In fact that was a recurring instance.  People were genuinely curious to hear from someone of my experience- but more than that, people were interested in building solidarity- either by self-identifying their own drug use or sex work, or some other personal link to it. I made lots of connections, planned future collaborations, and met a few new friends out of the experience. Even the issue of the exclusion created by alcohol (at one stage the hashtag morphed from #Junket to #Drunket) was discussed.  It’s weird, all of this kum-ba-yah positivity was not something with which I was used to being comfortable but it made me realise something- I had been punk’d.

*For the past eight months I’ve been involved in a fairly intense bullying situation. I don’t really want to go into the details of it (it involved me losing my job and moving interstate as recently as a week before Junket) but I’ll say when one is the victim in that situation it becomes second nature to retreat, to hide, to shut down.  I hadn’t engaged with social media in any significant way during that time and my once on-the-verge-of-burnout portfolio of community activity had now faded to near obscurity.  It made me scared. I had been tricked into seeing everything through the lens of doubt and cynicism. And it was fucked.

As well as learning heaps, being inspired, and having way too much fun, Junket made me face these fears and reconnect to a world I had hidden away from. I needed that pressure- no, encouragement- I needed the opportunity to step out of the cage that had been built around me. Of course the process wasn’t perfect (what process ever is first time around?) and “the brightest minds” are aware enough to know that Junkee and corporate sponsors were gaining from our participation, but ultimately it’s indisputable that the organisers had made good on the (urban) dictionary definition of what a Junket was going to be: “An… event for which an individual personally pays little to nothing, but reaps extreme benefits.”

For me, what I gained was summed up by a delegate during the feedback session: “it’s OK to be uncomfortable.”