The Hypocritical Victimisation of Asian Sex Workers in Victoria

*No, my name has not been changed.

“Are you HIV+? No offence I’m just asking coz you’re Asian.” That was an actual question asked by an actual client to me, an actual Asian sex worker.  I cannot tell you how offended I was and needless to say the only thing this person caught off me was angry vitriol.

At a pub with an acquaintance I had described the Australian Sex Worker rights movement, the importance of sex worker organisations and the reflected on the reasons I was not only a sex worker but an active advocate for our rights.  The conversation (and our relationship) went downhill when they said, “that’s all well and good for you, but what about the thousands of sex slaves in Australia? ”

During a public forum I organised as part of the Melbourne Festival of Sex Work, a member of the audience and came up to me and disclosed that he had regularly visited a Asian brothel but he felt overwhelmingly guilty because he could not tell if the sex worker he was seeing was a “trafficked victim” or not.  He had conversations with this sex worker but still could not be entirely persuaded to believe that the sex worker was there by choice, even though that is what she had repeatedly articulated to him.

These incidents are a constant reminder of my place within the Australian consciousness- I am presumed to be a vulnerable victim of exploitation, unworthy of being trusted, incapable of agency and in dire need of rescue.  I must be stripped of my human rights, indeed my humanity, in order to fit within the public’s understanding of who I am: an Asian Sex Worker.

The constant reporting of the supposed tragedies faced by Asian sex workers is a relentless kick to the guts.  Not merely because I am an Asian Sex Worker and these tales do not at all reflect my experience of sex work, but more so because I am an advocate for sex worker rights whose goal is to work towards a future where me and my community are not perceived to be the bottom rung of Australian society.  These reports do nothing but keep us down.

Adding extra bitterness to this disappointment is the fact that I have had contact with these journalists.  Both Maris Beck of the Age and Beau Donnelly of the Port Phillip Review, in my conversations with them, had expressed a desire to be respectful of sex workers and listen to their voices.  It is such a shame that neither of these wishes is reflected in their writing.  The bigger shame is that these stories broadcast to the sex worker community a clear message: “We are not interested in your stories unless you fit into our agenda”. They forfeit the trust of sex workers who exercise agency about choosing to be a sex worker (the majority of my community) and, in turn, our stories are seldom told.  Without this authentic perspective being made available to the broader community, enough ignorance is created to perpetuate the prejudice against Asian sex workers. 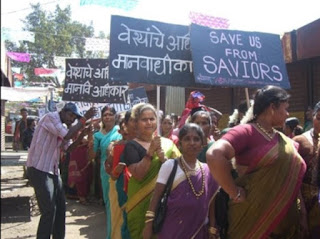 The fact of the matter is there is high value attached to the stereotype of the poor exploited Asian sex worker victimised by criminal Asian syndicates- and the money is not flowing our way.  Academics and journalists have built their careers on it and non-government organisations have made an industry of convincing the public that I am some sort of hapless victim. Project Respect, repeatedly referred to in media reports of trafficking as somehow an authority on the sex industry , has an agenda to see the entire sex industry re-criminalised.  It’s interesting, the organisation claims to see approximately 20 “victims of human trafficking” annually, that is  0.2% of the estimated 10,000 sex workers in Victoria, yet this organisation not only provides the representative case studies that journalists base their media coverage on, they are influential at a policy level.  All of this would be harmless charity- except it’s not.

The rights of sex workers- particularly Asian sex workers- are constantly being undermined.  In addition to the episodes of racism I have experienced directly, this prejudice entrenches itself in the policy and practice of sex work regulation.  Throughout our community we have heard of sex industry workplaces targeted by the race of workers alone.  Where premises have workers from a range of ethnicities, Asian sex workers are sorted out from the rest to be questioned.  Despite the fact the majority of migrant sex workers come from countries such as New Zealand, the USA and the UK, rarely do these sex workers face the same scrutiny as their Asian colleagues.  When discussing our industry, “does not speak English” is treated as an indicator of exploitation.  According to current Victorian advertising regulations I’m not even allowed to say I am Asian, doing so places me at risk of receiving a $5,633 fine.   And while some commentators may point out that this policy applies to everyone regardless of ethnicity, it is undeniable that this policy has much more of an impact on sex workers of colour than it does anyone else.  With the sheer number of the examples of the victimisation of Asian workers it's hard to feel much other than that these are part of the wider racist agenda in Australia.

Further supporting the investment in the ‘Asian sex workers as victims’ paradigm are the entrenched systemic causes of issues of non-compliance and clandestine activity.  While much attention is paid to alleged exploitative intentions rarely are the more mundane factors examined.  While licensees of non-English speaking backgrounds are over represented amongst CAV’s reporting of non-compliant operators, there is a negligence to report that all of the information resources regarding sex work regulation only comes in one language: English.

Just as ignored is the discriminatory immigration policy that prohibits single women flying in from Asia.  Sex workers wanting to enter Australia cannot elect to do so in an open and transparent way. Instead, they are forced by our policy to engage with agents who organise not only the workplaces and accommodation for these sex workers but facilitate the process that circumvents Australia’s closed door, which may include bribing government officials or paying a male companions to create the facade these women are not single. The expense of this whole process might amount to $40,000 and is then charged to the sex worker (this what is interpreted as debt bondage), which she can pay off in about 2-3 months.  If the Australian government was serious about addressing this problem it could bust the business model of these supposed traffickers, just as it is interested in doing so for people smugglers, by granting working visas to migrant sex workers, as has been recommended by sex workers for years . The product of supposed “people traffickers” is passage, this is an easy enough demand to eliminate with small, cost neutral changes.  But no, if I was a more cynical sex worker I could suggest that the government’s inertia on this issue is more indicative of an interest in maintaining the problem.

These causes are not sexy topics of conversation.  People would rather read about stories of desperation, victimisation and exploitation.  It’s easier to believe that there are evil exploiters in the world and the solution is to stamp them out.  It’s hard for Australians to believe that their own policy is complicit in the perceived problems of human trafficking.  It’s hard for Australians to believe that people of colour from countries much poorer than our own and who speak a language other than ours could have enough agency to stand and make a choice.  I am not saying that incidents of criminal activity do not exist in the sex industry, I’m saying, if one is genuinely interested in addressing these it cannot be done while ignoring or disrespecting the people who are not only most affected, but the people who are most familiar with the issues and are the people that can most effectively assist in the  implementation any resolution: sex workers.

I am Asian. I choose to be a sex worker. I have as much control over my life as you do. I deserve to be respected as much as you are.  Just because I use my real name and my real face to tell this story shouldn’t make it less believable than some anonymous case study.  Asian sex workers deserve to be listened to and we don’t need anyone speaking on our behalf.  It’s time the Australian public puts away its prejudice and start listening to us.

Within Australia, Asian Sex Workers are active in supporting each other as well as representing their own community.

Organisations of sex workers exist across Australian States and some of these have sex workers of non-English speaking background providing peer education and support for migrant sex workers.  Two such organisations are SIN in South Australia and Respect Inc. in Queensland.

Unsurprisingly, there is no funded sex worker organisation in Victoria.
Posted by Christian Vega at 04:16